Tuesday 17 October 2017, Tooting Tram and Social. Her first time on stage since a couple of things at school. She looks good but nervous. The older girl has done a few open mic nights before, and chats with her reassuringly, hugs her, helps her bring the microphone stand down. Finally the nine-piece band has finished tuning up and running sound checks and they launch into their first number, Barefoot. She sings beautifully, but keeps her movements small. The band is enthusiastically received, with help from friends and family in the audience. Apart from the other girl, her bandmates didn’t realise this was her first performance in public – she hadn’t told them so they wouldn’t fuss her.

The following May she came with me to see the Rolling Stones at London Stadium. She has never needed any lessons in stagecraft, but if she had, it was a good one. The support act was Liam Gallagher: as we entered the stadium he was in his default state of aggressive moaning.

We could see him on the big screen of course, but from a distance it took me a full five minutes to locate him in person on stage. He wore dark blue against a dark background, he stood there and barely moved. He didn’t look as if he was enjoying himself. So what chance did we have?

Liam is famously a huge Beatles fan: had he not, then, heard the story of Bruno Koschmider yelling “Mach schau! Mach schau!” (Put on a show!) to enliven the five young lads from Liverpool, passive as they played their instruments in the Kaiserkeller in Hamburg in 1960?

When the Rolling Stones came onstage, the change in mood was immediate and thrilling. Jagger, of course, still appeared a tiny figure, but he wore a shiny silver jacket and moved ceaselessly to every corner of the stage – you couldn’t miss him – and he transmitted an energy belying his 74 years to the whole stadium.  When it grew dark he wore a billowing red silk shirt which glowed like a beacon.  We had paid for a show, and by god we were going to get one.

That’s how you put on a show, I said, as if she needed telling. The nine-piece band she sang with worked well musically, but its members had very different personalities, and the negativity some brought to group discussions may have inhibited her stage performances. But her confidence was quietly growing with experience and positive feedback. When they played their most prestigious gig yet at a festival, other band members said “It’s 400 people, aren’t you nervous?”  She replied “No, 40, 400, 4000, we play for people so we can play to more people, that’s the point. This is why we’re doing this.”

The nine piece evolved into a smaller, more flexible band which had the advantage of not needing such a large stage, and not taking so long to do its sound check. Just as important was the personal chemistry between members: they were also mates. Confident of the band’s support, her performances became freer and more energetic.

Sunday 25 August 2019, Greenbelt Festival. A large tent at this family friendly festival, mothers, fathers, children and babes in arms swaying to the music. The People Versus are closing their set with one of their most danceable numbers, Charybdis. It’s hot in the tent, but she’s singing and dancing freely, her floaty top amplifying her movements. 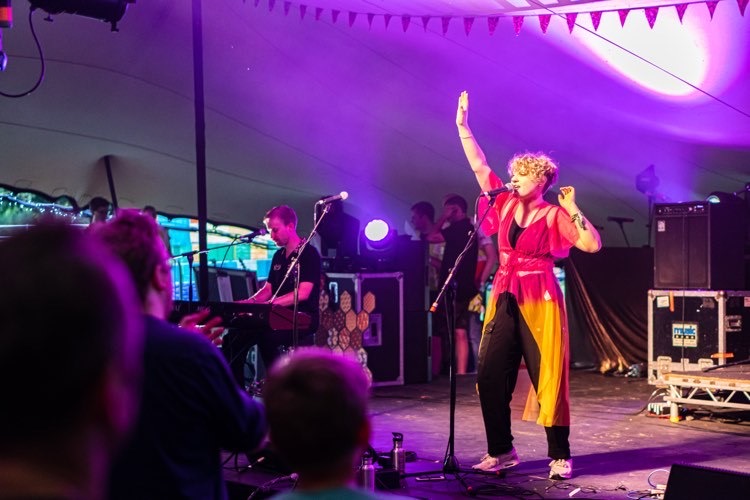 The band is finishing its sound checks. She’s chatting to me, quite relaxed, three or four rows back in the crowd. The announcer leaves the stage to a burst of applause, and she has to push her way through. The teasing opening riff of Like I’m Lonely/Driftwood starts up as she climbs on stage smiling and looking at ease. Now she’s on stage the show can start.

She brings down the mic and starts to move to the music. She hasn’t started singing yet and we already know we’re going to have fun. Let’s do this.