2012 was a good year for London. The Queen celebrated her Diamond Jubilee, and millions defied awful weather to celebrate with street parties, and to watch the royal procession down the Thames. And of course London became the first city to host the modern Olympics for a third time: again the weather was no friend, but for a few weeks in August, London welcomed all nations. In those innocent pre-Brexit days, the city seemed like the capital of the world, a vibrant, open and cosmopolitan place, hosting the biggest party ever, presided over by Bolt and Farah. Tickets sold out for Olympics and Paralympics alike, and while there were outstanding British successes – most famously on “Super Saturday” – the venues were filled with knowledgeable and enthusiastic fans, happy to applaud excellence from all parts of the globe. Although there might have been less applause for the Russian competitors, had we known then what we know now.

The opening and closing ceremonies were of course a big part of the fun, and the Rolling Stones were notable absentees. Presumably they were invited, but Mick Jagger has a record of avoiding what he sees as “high risk” gigs where the Stones don’t have control or set the agenda – for example he chose to contribute a video with David Bowie to Live Aid rather than risking the Stones at a gig where they could only play for twenty minutes, and might be outshone by another band on the day.

But 2012 marked the 50-year anniversary of the birth of the Rolling Stones, and something had to be done. So they announced a couple of gigs at the O2, to go on sale at 9 am, just twenty-three days before the first gig. It was a working day, but a quiet one, so I was able to log on before 9 and begin the frustrating business of trying to buy a couple of tickets. My colleague Chris put his faster reactions at my service, and joined the chase. To my indignation, work intervened and I became embroiled in a long phone call: but meanwhile Chris continued the search. Before long he drew my attention to his screen, where he at last had the offer of two floor tickets – more than I had wanted to pay, but I was getting desperate. I beckoned the “buy” trading gesture, and they were mine. 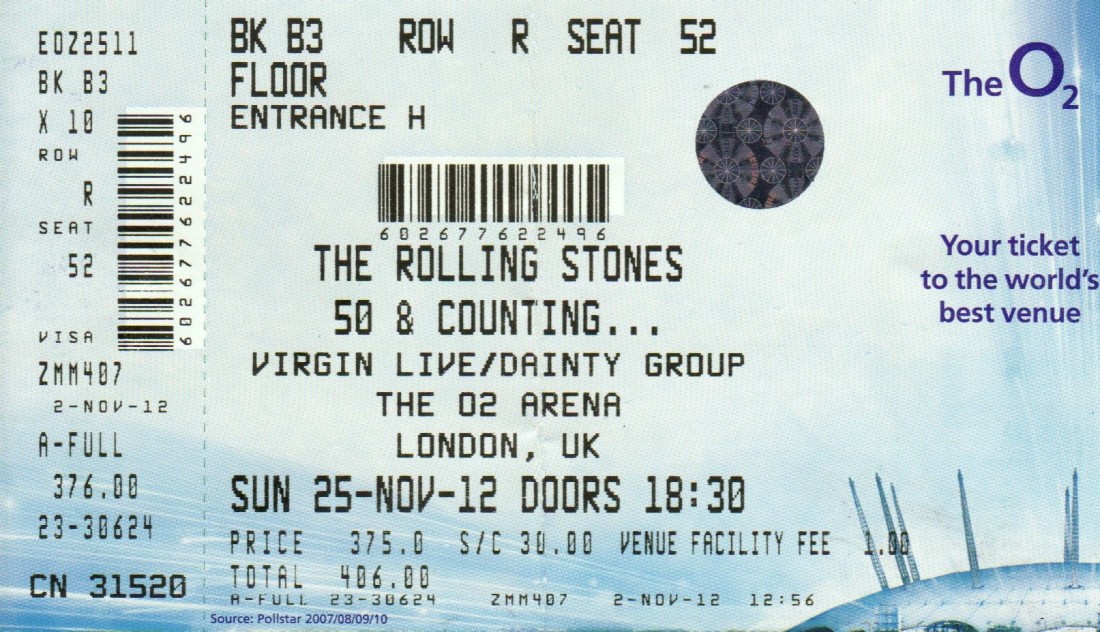 The price was exorbitant, but if I’d wanted I could have seen a tribute band for much less – there’s only one Rolling Stones. I get that. But what really grated was the additional £30 “Service Charge”. What the fuck? We have grown used to having to pay for things that were once free (or at least no extra charge – hold baggage on flights springs to mind). For me the test of fairness is whether you can avoid the charge if you choose. But you can’t go to the gig without buying a ticket, so it’s just bullshit and greed.

Ah, the Stones. Unquestionably the greatest rock’n’roll band of all time. No-one else can match them for authenticity, for appetite, for longevity, most of all for excitement. I was a latecomer to their party: I loved the Beatles of course, but the Stones seemed too dirty and threatening to a polite pre-teen boy. But Rob and I bought a pre-owned copy of Beggars Banquet, and it was rarely off our turntable about 1970. Street Fighting Man, Sympathy for the Devil, Jigsaw Puzzle, the sly, lecherous Stray Cat Blues, and the rare Keith Richards vocal on Salt of the Earth…amazing tracks. I was fascinated too by the gatefold sleeve, with the elegant cursive invitation on the outside opening to reveal the louche, depraved feast within. 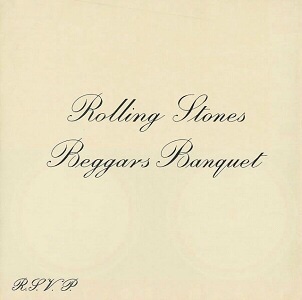 My wife reckoned she had ticked off the Stones when we saw them at Wembley Arena in 2003, where the Darkness playing a deafening support set. So Rob was the obvious choice to invite, and I met him off the Eurostar at St Pancras early on Sunday evening, had dinner and made our way to the O2.

Soon the lights went down, and the arena was filled with drummers filing into position surrounding the floor. The rhythm pulsed in our ears and we looked at each other: for one moment we were sixteen and thirteen again. The Stones were coming!

The band took the stage with a driving version of “I Wanna Be Your Man”, a rare acknowledgement of the helping hand they had from the Beatles early in their career – the story goes that McCartney and Lennon knocked it up in a corner of the room while Jagger and Richards looked on in awe. I took the choice as a promise that they would reach right back to the beginning of those fifty years. And the next three numbers also came from their first few years: Get Off Of My Cloud, It’s All Over Now and Paint It Black.

Jagger was 69 years old, and made no concessions to his age, capering around the stage like a man half his age, but there were moments of unintentional comedy: Get Off Of My Cloud came across as a crotchety old gent telling kids to get off of his lawn.  But he had some fine banter: “It’s taken us fifty years to get from Dartford to Greenwich” and a cheeky teasing line about the ticket prices, “How are you doing in the cheap seats?”

The playing was loose and energetic. Mary J. Blige joined Jagger for Gimme Shelter, which was fine – although Florence Welch’s turn at the next gig was much more exciting, when she went toe to toe with him, right in his face. Jeff Beck appeared for a bluesy Going Down. My premonition that this series could mark the band’s final gigs – although happily to prove wrong – seemed to be confirmed by cameos from former Stones Bill Wyman (It’s Only Rock ‘n’ Roll and Honky Tonk Women) and Mick Taylor (Midnight Rambler). Towards the end of the set Keith Richards took over vocal duties for a couple of numbers, and large numbers of fans headed for the loos or the bars.

Jagger returned and the show wound to a climax with Brown Sugar and Sympathy for the Devil. While we cheered for an encore, the excitement mounted as we made out a gospel choir gathering onstage in the gloom. That had to mean You Can’t Always Get What You Want! They finished off with an electrifying Jumping Jack Flash with Keith Richards pounding out the famous riff: that has never been my favourite Stones song, but since hearing this the song brings me out in goose bumps.

The show was supposed to end with (I Can’t Get No) Satisfaction, but a late start meant that we were now up against the venue curfew: playing another number would have incurred a hefty fine on the band. With Jagger in charge, that was never going to happen. To compensate, here is a professional quality clip of their storming performance from Glastonbury the following summer, where that epic riff churns on forever.  Just the bow at the end gives me the shivers. Back in the O2, we may not have had Satisfaction. But we certainly had satisfaction.

I Wanna Be Your Man
Get Off of My Cloud
It’s All Over Now
Paint It Black
It’s All Over Now
Paint It Black
Gimme Shelter (with Mary J. Blige)
Wild Horses
All Down the Line
Going Down (with Jeff Beck)
Out of Control
One More Shot
Doom and Gloom
It’s Only Rock ‘n’ Roll (But I Like It) (with Bill Wyman)
Honky Tonk Women (with Bill Wyman)
Before They Make Me Run (Keith Richards on lead vocals)
Happy (Keith Richards on lead vocals)
Midnight Rambler (with Mick Taylor)
Miss You
Start Me Up
Tumbling Dice
Brown Sugar
Sympathy for the Devil

Encore:
You Can’t Always Get What You Want (with the London Youth Choir)
Jumpin’ Jack Flash