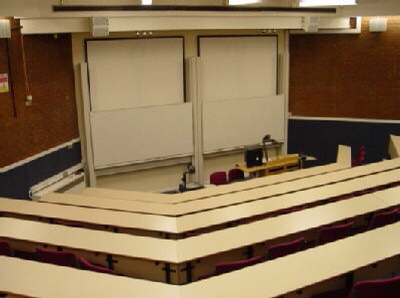 Drifting off and there’s that car park, that roundabout, just in the top left up there, just as you go out, just as you come in, three dimensions playing on the boundaries of sleep

I’m not in the exam hall, no, but the exams are in about two weeks’ time, I’m in the lecture theatre in 1978, in that new social sciences block they built at Warwick, the subject is econometrics and it’s just before lunch and the lecturer is filling the whiteboard with line after line of incomprehensible algebra, I’m making a halfhearted attempt to take notes, copying perhaps every other line, semi-legibly, but aware that they will never convey any meaning, the exam a cloud looming over me

I’m a late entrant in a marathon and I haven’t done any training but I know I can get round, I start off behind all the others and enjoy running without any pressure on my time, light and effortless, and catch up with the rest but the course enters a building where I take a break and when I come out the others have gone and I don’t know which way to go

I’m sitting on a chair at a table, and I want to move to another, so I rise up, still in seated position, float over the table and drop into the other chair in a controlled descent to within an inch of the seat, not touching it but hovering just there ready to move again

We’re all there, extended family, but none that I know, in our big holiday house, and we’re packing to go home: we have to catch a plane, and there’s plenty of time, or at least there was, but the deadline for leaving has passed, and everyone else is ready but still I fuss around trying to complete unspecified but to my mind necessary tasks, or to find things that should be easy to find, and I’m still engaged in this when the plane’s departure time has passed

I’m staying in a large house, York maybe, perhaps I own it, and there’s a small hatch leading off a landing to a suite of larger rooms which are nicer but neglected, and I wonder, am I allowed to go there and why don’t I use them more often

I’m at work perhaps starting back at one day a week for holiday cover, and I’m shown into the dealing room but there’s no seat, and eventually they find me a position but it’s nowhere near my colleague and I sit down but I can’t log in and there’s no business and I think wait, don’t I need to retake my exams

We’re in a small group and Mum is there and I say, but Mum, you’re dead, and she says yes, I know, but never mind that, and I wake up and I’m just glad to have seen her

I’m driving, or at least I’m travelling in a car, and it’s in reverse, and I can steer but I can’t stop it or control the speed, and I’m looking at the mirrors, and it’s way too fast and I see cars going the other way, and the car seems to be negotiating the bends and avoiding other traffic but I know this is not my doing but providence and cannot last