Alan looked listlessly at the minutes he had taken of the meeting. It wouldn’t be difficult to tidy them up so they would read smoothly. A coherent and complete account of – what? The bickerings of academics, mostly old, male and white. No wonder there were so many murders in Oxford.

It wouldn’t be difficult, and that was the problem: he was bored, although the professors would often praise his diplomatic skills. He had the knack of nudging warring parties to compromises, quelling storms in this parish teacup. Perhaps he had no enemies because he was so mildly flavoured and preferred to avoid conflict.

He remembered with a start the school reunion he’d agreed to attend the following Saturday in Reading, a group of five gathering to mark thirty years since leaving school. He should probably book a room at the pub. But the website showed no rooms available. Damn, left it too late. There was a Premier Inn within ten minutes’ walk, but he couldn’t face it. He resolved to forego alcohol and drive back to his own bed.

When he arrived the boys were already onto their second pint, and the conversation was lively. The others had all arranged taxis or booked rooms in town, and after the initial greetings he felt out of step, excluded by sobriety as they grew louder. Disengaged, he let his eyes wander round the group.

Look at Robert, the cool one, who’d been in a band at school and dropped out before his final year. After a decade of trying and failing to make it as a musician and songwriter, two failed marriages and three children, his dad had lent him the money to buy a beat-up old studio, and he’d refitted it, and done very nicely, thank you: now he rubbed shoulders with rock royalty, and was regaling them with stories of Eric Clapton and Van Morrison. Like the gold rush, thought Alan, the prospectors don’t often get rich, it’s the guy who sells them the picks and shovels. Robert had lived.

And Martin the nerd, laughing enthusiastically at Robert’s anecdotes – already alternating his G&Ts with straight tonic water – who had wanted nothing more, since he was fourteen, than to be an accountant, and had applied himself single-mindedly to this steady ambition. Surely he was even more boring than Alan? Maybe not, Alan had to concede, because he had such an air of contentment – seemed so relaxed in his skin – that he made very easy company, never seeking the limelight – one of the gang.

Mark, he remembered, had come in to school on a motorbike almost as soon as he reached sixteen, and had spent his weekends tinkering with it. Whether to make it faster or just noisier Alan never knew. Mark had trained as an engineer, and had wound up in charge of a large car plant in the Midlands. He still favoured a leather jacket – although the evening was warm – and walked unevenly, the steel pins in his leg a souvenir of his biking days. He asserted, as he waved his pint about, that Brexit would make no difference to the business.

Alan went to challenge this view, but mistimed his effort to be heard over the volume of his alcohol-fuelled friends. His mind drifted back to the sixth form: his French teacher “Your work is excellent, Loudon. Have you considered Oxbridge?” And Mr Kershaw had been right, in a way. Alan had sailed into Oxford with near perfect A-levels. He hadn’t enjoyed the atmosphere of the college – initially he found it stifling – but he applied himself well to his studies, and when his tutor pointed out that he was on course for a solid first, and encouraged him to study for a doctorate, Alan had felt flattered.

Eager to please, and not drawn to any external careers, he had remained in academia out of inertia and…lack of imagination? He’d found exams easy since primary school, and had been happy to let himself be swept straight ahead, as long as he received approval, never curious about other avenues, wary of the world outside.

So Alan started a doctoral thesis. On, then, to R. But he soon realised he was not yet at Q: he was not sure he had even reached N yet. He could answer questions easily, it seemed, but was he smart enough to ask one? He felt his intellect – or fatally, his curiosity – reaching its limit. With help from his tutor, he had concocted a question, and answered it in a way that was…fine, and duly collected his doctorate. But – and he was still embarrassed by how long he had taken to realise this – even if he became England’s greatest expert on Maurois, Molière and Mauriac, so what? He would still rank behind a hundred professeurs and professeures who had grown up speaking French, steeped in the literature and culture.

So he had lost any interest in pursuing a teaching post, but having met Alison he didn’t want to leave Oxford. He accepted a modest job in administration, and had risen to become secretary to one of the smaller colleges.

Nigel, who had got wind of the gathering and invited himself along, was now holding forth on how share prices were about to plummet. Annoying know-it-all little Nigel, Wormtail of the group, who had gone to work in the City and now owned a huge house in Beaconsfield. Thirty years on, bumptious as ever. 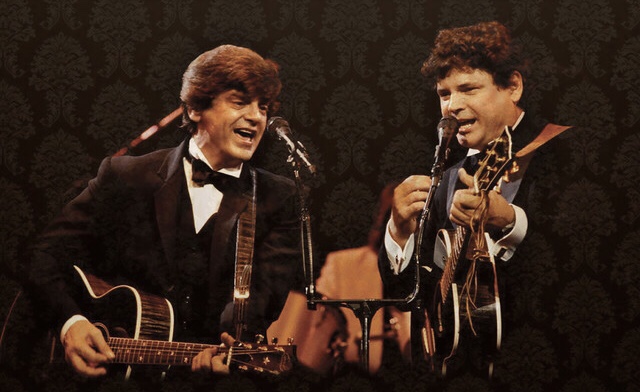 On 14 July 1973 the Everly Brothers were playing a concert at Knott’s Berry Farm in Buena Park, California. Halfway through the show the venue booking agent stopped the show: Don Everly was clearly incapacitated, playing erratically and forgetting lyrics. In frustration, Phil smashed his guitar and announced their split, telling the crowd, “I’m tired of being an Everly brother… The Everly Brothers died ten years ago.” Years of touring as “has-beens” in the wake of the Beatles and the music revolution they triggered had taken their toll.

The rift lasted ten years. Don and Phil lived two thousand miles apart: Don in Nashville and Phil in L.A. They pursued separate careers, with very modest success. Their fans were deprived of hearing those sublime harmonies in concert.

But by the end of those ten years, they were no longer regarded as a clapped out relic of the rock’n’roll era, but as a revered musical treasure. Albert Lee, noted British guitarist, was a friend of each brother independently, and was able to effect a reconciliation. They agreed to put their differences aside and perform together again.

But where? Their popularity had endured longer into the 1960s in Britain than in the USA: and with all the world to choose from, they opted for London’s Royal Albert Hall – or Albert Hall, as Don called it on the night – where they had last performed on stage with their musical mentor, their father Ike, on 11 October 1971.

Much thought went into presentation, and it was decided to use the huge width of the stage for dramatic effect. The idea was that Phil should walk on from the left, and Don from the right, so their meeting in the middle would symbolise the reunion.
“Do you think they’ll get it?” asked the brothers. The reply came back from their British hosts “Are you nuts? They’ll go crazy!”

I was only one year old when they had their first hit, but I had discovered their music as a teenager through the rock’n’roll revival films of 1973, American Graffiti and That’ll be the Day. Also, I should admit, through a Radio One broadcast each Sunday, which played the records from the chart five, ten and fifteen years ago: so in 1972, the show was playing Everly hits from 1957. I owe much to this show, which also opened my ears to early Elvis, to Fats Domino, Eddie Cochran and many more. It was presented by a Mr Jimmy Savile.

So in my teenage years I became a voracious reader of any books I could obtain about 1950s rock’n’roll. These had been very thin on the ground but were now growing rapidly in number as the first generation of fans reached maturity, writing perceptively and entertainingly about the music while retaining their passion for it. I gobbled up pop music encyclopaedias – they could point me towards new treasures.

In the early 1970s my friends at school were getting off on Genesis, Yes, Emerson Lake and Palmer and the like: to me it seemed bombastic, self-important and overblown, plain boring. In reaction I reached back into the simpler times before the reign of the Beatles, and acquired greatest hits collections by Chuck Berry, Little Richard, the Arcade release of Elvis’s 40 greatest. Once I was caught by a classmate on Watford High Street holding a newly purchased copy of The World of Billy Fury. I’m pretty sure that shredded the last of any “cred” I might have had.

It hurts, when a favourite band breaks up, or when your heroes fall out with each other.
And when the Everlys’ concerts were announced, it was well known, not just that Don and Phil hadn’t performed together for ten years, but that in that time they’d barely even spoken to each other. So when, on Thursday 22 September 1983, Phil walked out from the left, Don walked out from the right, and they met in the middle of the stage and embraced, the audience, as predicted, went wild. They launched into a driving version of The Price of Love, and we were in the palms of their hands for the rest of the evening.

They sang their best known hits with a joyous freshness, each familiar song revealed anew. They also made time for an acoustic selection from Songs Our Daddy Taught Us, referencing their previous appearance at the venue.

I went with my cousin – another Phil – several years older than me, and able to remember the Everlys the first time round. If anyone tells you nostalgia ain’t what it used to be, they haven’t met Phil: he is capable of being nostalgic for lunch by teatime. But when the Everly Brothers completed an exquisite, tender version of All I Have To Do Is Dream, I had to admit that (cousin) Phil’s Welsh-accented roar of ecstatic approval was entirely appropriate.

Throughout the song the brothers looked at each other with an intense fondness. Singing close harmony of course requires them to keep each other in view, but this was something much more. The years of bitterness melted away as they rediscovered their love for each other, and their love for singing together. Two voices, no more than pleasant individually, coming together to produce something sublime. And we were there to witness this joyful reconciliation.